On Friday, July 30, between 09:00 and 10:30 p.m. UTC, the Ariane 5 VA254 flight successfully placed two satellites in orbit from the Guiana Space Center (CSG): Star One D2, built by Maxar Technologies for Brazilian operator Embratel, and EUTELSAT QUANTUM for Eutelsat, developed with Airbus Defence and Space and the European Space Agency (ESA).

With this new Ariane 5 success, the first in 2021, Arianespace is pleased to be continuing its service to two of its most loyal customers, operators Embratel and Eutelsat. This mission with two highly innovative satellites on board, built by Maxar Technologies and developed by Airbus Defence and Space and ESA respectively, has reconfirmed how the competitiveness and reliability of our launch solutions serves the ambitions of our customers. We are committed to their total satisfaction, through our current launchers, Ariane 5, Soyuz and Vega, and future launchers with Ariane 6 and Vega C.”

Star One D2 is a high-capacity, multi-mission satellite with Ku-, Ka-, C- and X-band transponders, that will enable it to expand broadband coverage to new regions in Central and South America and add an updated X-band payload for government use over the Atlantic region. Built on Maxar’s proven 1300-class platform at the company’s Palo Alto, California, manufacturing facility, Star One D2 will improve access to high-quality services, serving the parabolic fleet in Brazil, Pay TV, cell phone backhaul, data, video and Internet for corporate customers and government agencies.

The EUTELSAT QUANTUM satellite was developed in the framework of a public-private partnership between the European Space Agency (ESA), the operator Eutelsat and Airbus Defence and Space. With its configurable software-based design, EUTELSAT QUANTUM will be the first universal satellite in the world that can be repeatedly adjusted to the customer’s requirements at any time. It is equipped with electronically steerable receiving antennae and operates in Ku-band with eight independent reconfigurable beams. This configuration allows the operator to reconfigure in-orbit the radio-frequency beams over the coverage zones, providing unprecedented flexibility in data, government and mobility services.

The relationship between Arianespace and both Embratel and Eutelsat goes back more than three decades and has only become stronger over time. Since 1985, the year of its first mission for Embratel, Arianespace has launched the Brazilian operator’s entire fleet of 12 satellites. In addition, global operator Eutelsat has entrusted the launch of 36 satellites to Arianespace since 1983.

For this flight, the performance required of the Ariane 5 was 10,515 kg, including 9,651 kg for both payloads. Ariane 5 was also equipped with a cryogenic upper stage called ESC-D, whose tanks were extended for this mission, with an overall mass of the stage at liftoff of more than 19 metric tons.

Ariane 5 blasting off from the Guiana Space Center is a strong symbol at this time when Europe is resetting its ambitions for space, in particular with launchers. Congratulations to the teams at ArianeGroup and Arianespace and all our partners, who once again demonstrated their remarkable professionalism with a perfect launch campaign. Our solid expertise will also be a major factor in the success of Ariane 6, for which the first flight model is currently being integrated at our sites in France and Germany.”

ArianeGroup is the lead contractor for the development and production of Ariane 5 and Ariane 6 launchers. The company coordinates an industrial network of more than 600 companies (including 350 SMEs). ArianeGroup oversees the entire Ariane 5 industrial supply chain, from performance optimization and associated studies, to production and mission-specific data and software. This chain includes equipment and structures, engine manufacturing, integration of the various stages, and launcher integration in French Guiana. ArianeGroup delivers a flight-ready launcher on the launch pad to its subsidiary Arianespace, which operates the flight from lift-off, on behalf of its customers.

Ariane 5 is a program of the European Space Agency (ESA), carried out in cooperation between public institutions and industry. Marketed and operated by Arianespace, the Ariane 5 launches take place from the Guiana Space Centre in Kourou, with the support of teams from the French space agency CNES. 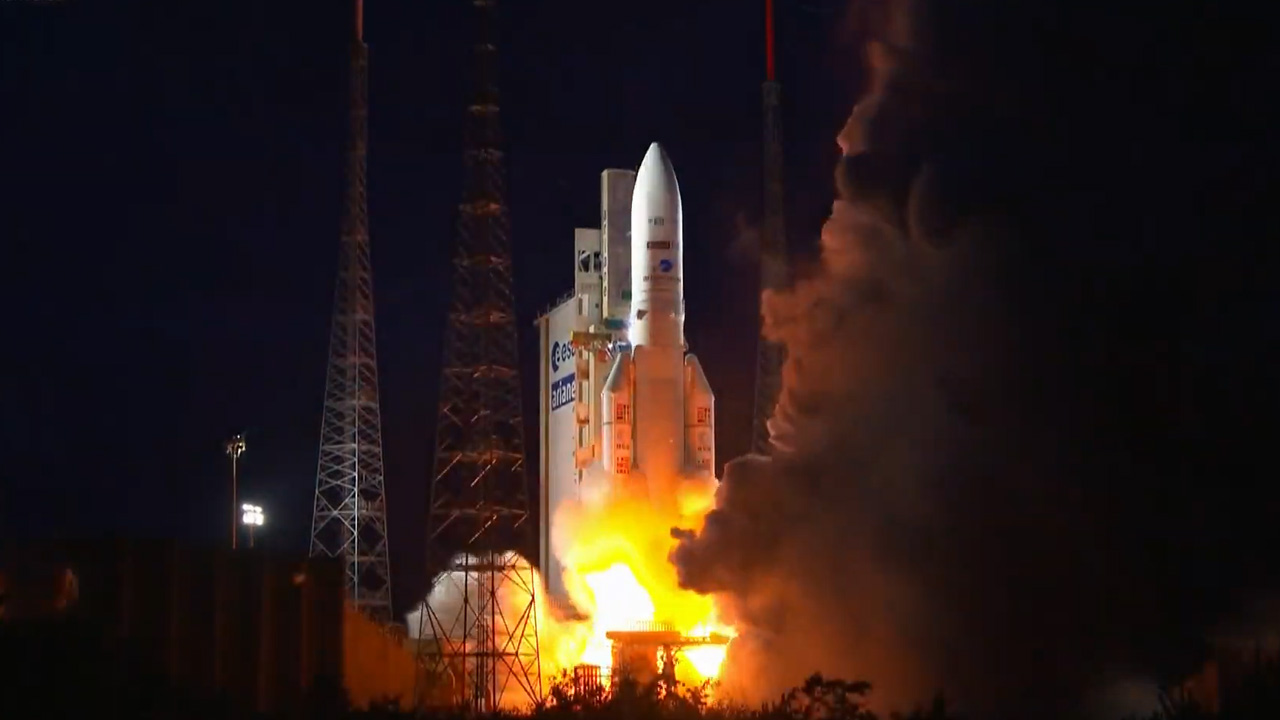