Airbus Safran Launchers, the joint venture created at the initiative of the Airbus and Safran groups in order to reorganise the European launchers sector, is to be known as ArianeGroup. The change in corporate name will be effective as of July 1, 2017.

This change in identity, embodied in one of Europe’s biggest successes, is the logical next step following the decision of the ESA Member States at the Ministerial Conference in Luxembourg on December 2, 2014, to create a new family of European launchers around Ariane 6 and to give greater responsibility to the industry under a new governance system.

Just over two years after its creation by the Airbus and Safran groups in January, 2015, and less than a year after its finalization on July 1, 2016, the new company has reorganized the European launchers sector by redefining and implementing an efficient and optimized industrial organization.

The new identity of Airbus Safran Launchers now reflects its existence as an international group, consistently strengthens the coherence of the image with its Arianespace subsidiary, and marks its total commitment to the current and future success of all its large-scale programs as well as its space equipment activities.

« Flying the flag for the world’s most reliable launcher and its successor, which we are developing with our European space industry partners, brings our group and its subsidiaries together under the banner of European excellence and prestigious space history. All the employees of the Airbus Safran Launchers group will, as of July 1, be united under the same name, something that is a real source of pride for all our teams. They will be more integrated and efficient than ever and will continue to serve all our customers, regardless of their field of activity or their products, with the goal of achieving consistently greater reliability, competitiveness and innovation. Our presence at this year’s Paris Air Show, under a common group name, demonstrates the energy and efficiency with which the entire European space industry has been able to reinvent itself and move towards a common goal of being able to address the increasingly fierce global competition with greater effectiveness and to guarantee Europe lasting and independent access to space. » declared Alain Charmeau, CEO of Airbus Safran Launchers. 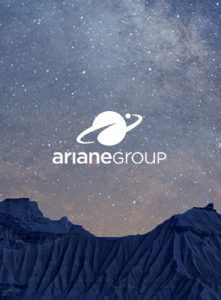 Today the group, with more than 9,000 highly qualified European staff, is able to offer its customers a completely integrated and comprehensive space launcher program, such as Ariane 6, from design to development, production, marketing and finally operation.

The name ArianeGroup is accompanied by a new logo and a brand architecture which covers all the subsidiaries controlled by the group: Arianespace, APP, Cilas, Eurockot, Nucletudes, Pyroalliance and Sodern.

ArianeGroup and its subsidiaries, will present themselves under their new identity at the Paris Air Show from 19 to 25 June 2017 (Chalet 400, Row S2 and Stand B272, Hall 2A).

The Airbus Safran Launchers group develops and supplies innovative and competitive solutions for civil and military space launchers, with expertise in all aspects of state-of-the-art propulsion technologies. Airbus Safran Launchers is lead contractor for Europe’s Ariane 5 and Ariane 6 launcher families, responsible for both design and the entire production chain, up to and including marketing by its Arianespace subsidiary, as well as for the missiles of the French oceanic deterrent force. The Airbus Safran Launchers group and its subsidiaries enjoy a global reputation as specialists in the field of equipment and propulsion for space applications, while their expertise also benefits other industrial sectors. The group is a joint venture equally owned by Airbus and Safran, and employs nearly 9,000 highly qualified staff in France and Germany. Its estimated proforma revenues exceed 3 billion euros.