The Galileo programme is a highly emblematic project for the European Commission and ESA, aiming to provide Europe with an ultra-high-performance global navigation system independent of the American GPS.

To speed up commissioning of the constellation, Ariane 5 kick-started the project by launching four satellites at once from Kourou on 17 November 2016.

For this launch, an Ariane 5 was specifically adapted, because the mission was a special one. Unlike telecommunication satellites, which are equipped with propulsion systems providing them with some of the energy they need to reach orbit, the Galileo global navigation satellites had to be carried virtually to their final orbital positions at an altitude of 22,922 km.

The Ariane 5 ES version, used to send the five European ATV freighters to the International Space Station between March 2008 and July 2014, was therefore utilised. Equipped with the re-ignitable Aestus engine and a specially developed dispenser, it placed the four satellites in a medium Earth orbit during a marathon flight which was to least nearly four hours!

After several weeks of programmed drifting and some ingenious manoeuvring, the four satellites launched by Ariane 5 reached their operational positions in January and February 2017. The Galileo fleet today comprises 18 satellites. A further eight will be joining them on Ariane 5 launches scheduled for the third quarter of 2017 and for 2018.

75th consecutive success for Ariane 5 since April 2003, beating the previous record of 74 consecutive successful launches held by Ariane 4. In 13 years, Ariane 5 will have placed 149 payloads in orbit (or more than 623 tonnes) on behalf of institutional and commercial customers.

21st consecutive success by a launcher equipped with the Aestus engine.

First time four satellites were placed in orbit at the same time. 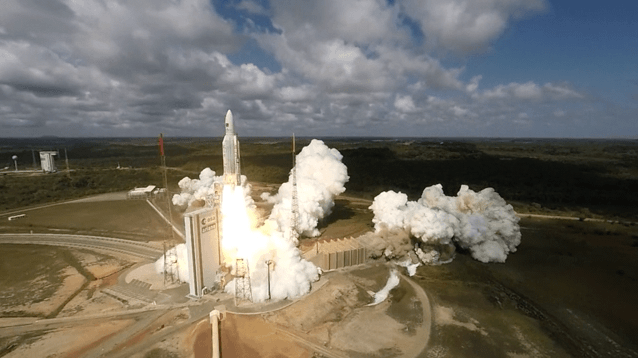