A high-profile visit to pay tribute to the successful start to the mission by the international telescope launched by Ariane 5 last December. 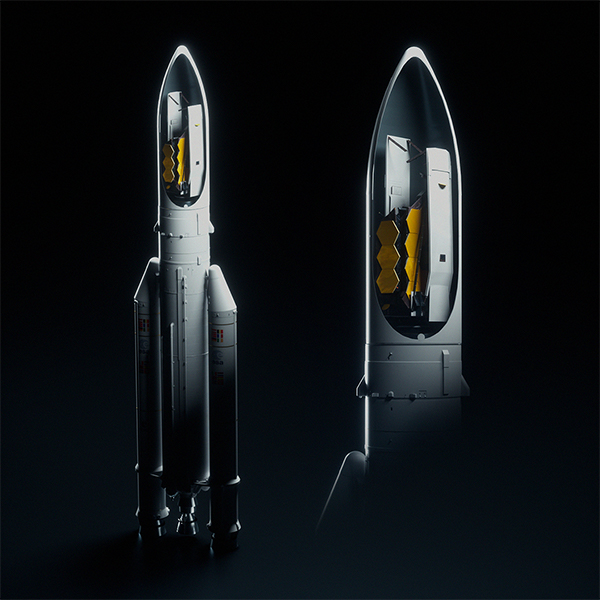 The James Webb telescope in the Ariane 5 fairing before launch (artist’s rendering). © ArianeGroup

In the company of Pamela Melroy, NASA Deputy Administrator, and Robert D. Cabana, NASA Associate Administrator, the American space agency’s Administrator came to the Les Mureaux site on 22 July, to pay tribute to our teams, following the release of the first images from the James Webb space telescope. This was an opportunity to look back at the success of this already legendary mission. 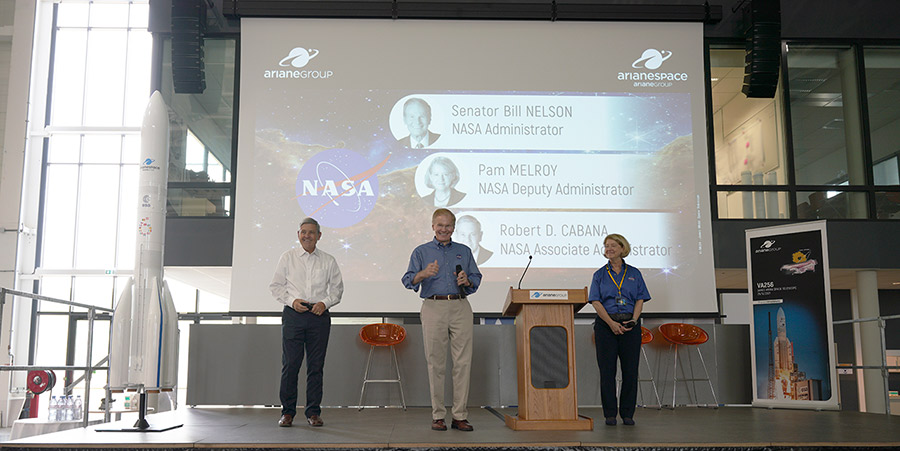 01 01
Left to right: the former astronauts today who are today the heads of NASA – Robert D. Cabana, Bill Nelson, and Pamela Melroy at Les Mureaux on July 22, 2022. ©ArianeGroup

On 25 December last, Ariane 5 lifted off on a mission for the American (NASA), European (ESA) and Canadian (CSA) space agencies, carrying the James Webb Space Telescope (JWST), the largest and most powerful telescope ever placed in orbit. A high precision launch on an extremely reliable launcher gave it the best possible start in life, enabling this telescope – carrying the hopes of so many – to open a new chapter in astronomy. 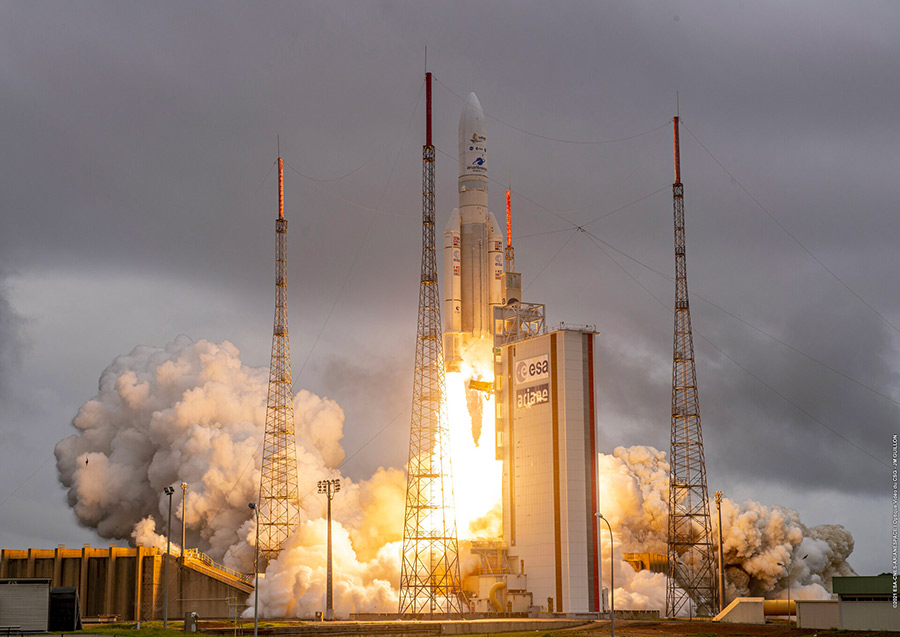 The precision of a launch determines the quantity of fuel a payload will have to burn in order to reach its final destination. The greater the precision, the lower the fuel consumption. Ariane 5’s perfect launch placed the telescope on a trajectory and at a speed that were ideal for transfer orbit to its target destination, the second Lagrange point, located 1.5 million kilometers from Earth.

Thanks to the know-how of the ArianeGroup and Arianespace engineers, the propellant saved in this way has increased the telescope’s working life by at least 10 years. This is a very real bonus when we look at the quality of the first pictures from the observatory.

After a one-month voyage to its destination and a few months of calibration, JWST sent back its first color pictures on July 12. This was a historic milestone and these pictures show thousands of galaxies, including the remotest objects ever observed.

This is the first time that an in-post NASA administrator has visited one of our sites.

Bill Nelson warmly thanked everyone and declared himself highly impressed by the passion for space and the expertise demonstrated by all the teams at ArianeGroup and Arianespace, throughout Europe. He underlined the fact that this exceptional expertise enabled the James Webb telescope to increase its life in orbit from 10 to 20 years. He paid a vigorous tribute to the commitment and know-how which will bear fruit “for all mankind”.

He said: “The very first image shows an area of the sky equivalent to a single grain of sand held at arm’s length! If we are seeing now the images that Webb has been able to take in just six hours of active observation, imagine what it can do over the entire sky in 20 years!” 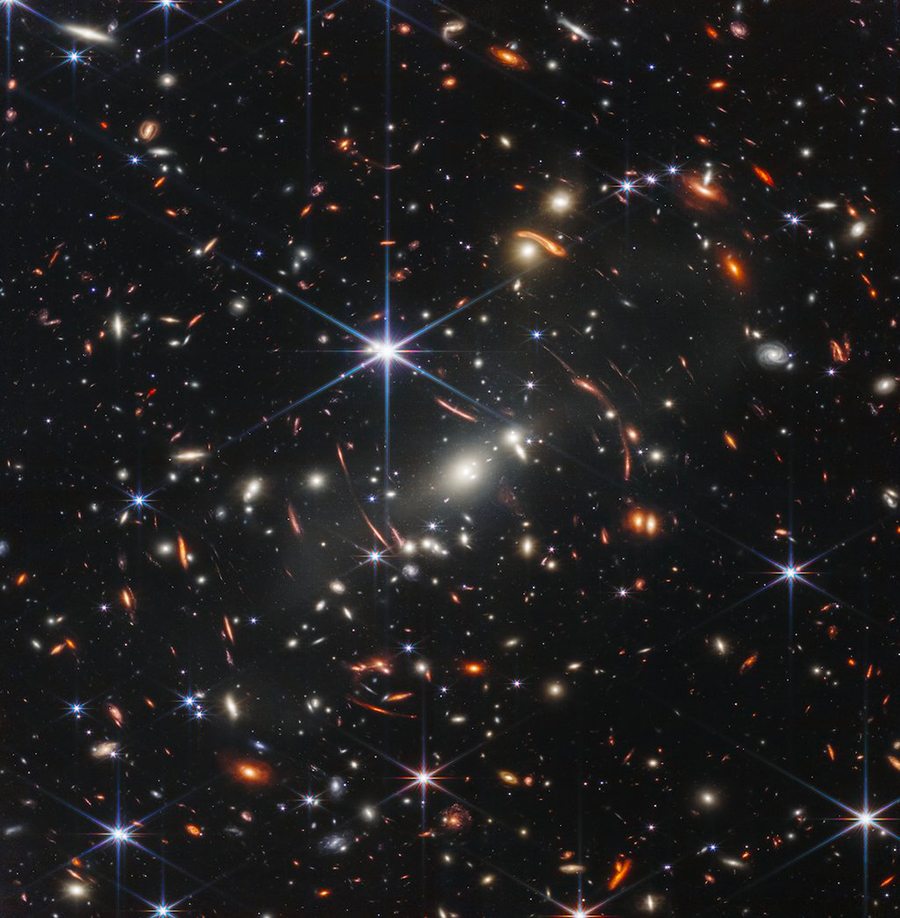 SMACS 0723 in the southern constellation Volans, the very first color picture from the James Webb telescope. In this composite image, each point represents a star, a galaxy or a group of galaxies. Here we see them as they were 4.6 billion years ago. © NASA

The first observations from Webb reveal the history of the universe: from nearby exoplanets to the remotest perceptible galaxies ever seen. The first pictures show an atmosphere rich in water and vapor clouds on WASP-96b, a hot giant exoplanet; or the far more precise photos of the Southern Ring Nebula, Carina Nebula and Stephan’s Quintet. These are galactic objects that had never before been observed with such accuracy. 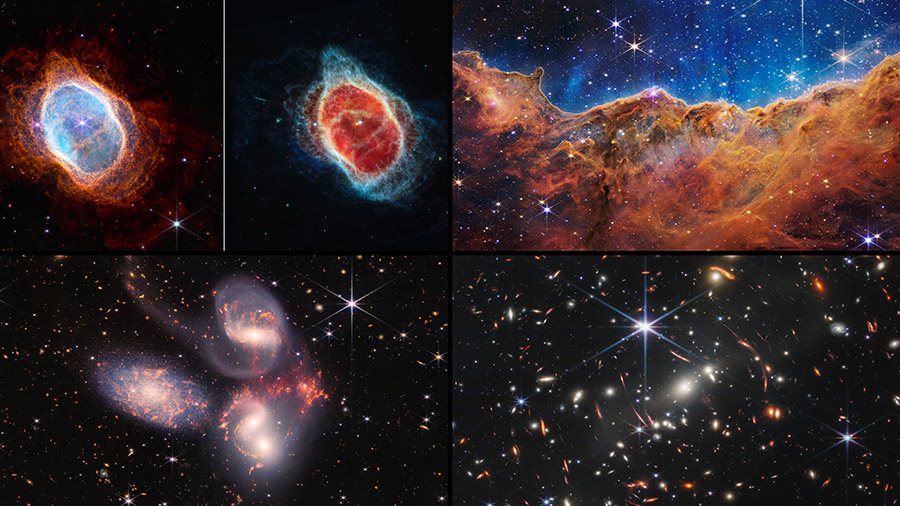 From left to right and top to bottom: the Southern Ring Nebula, a gas cloud surrounding a dying star (alongside the same, less detailed image, previously taken by Hubble); Carina Nebula, a star nursery, located 7,600 light years from Earth; a group of galaxies in the process of merging, called Stephan’s Quintet; and SMACS 0723, the first image from this first JWST batch to be presented. © NASA 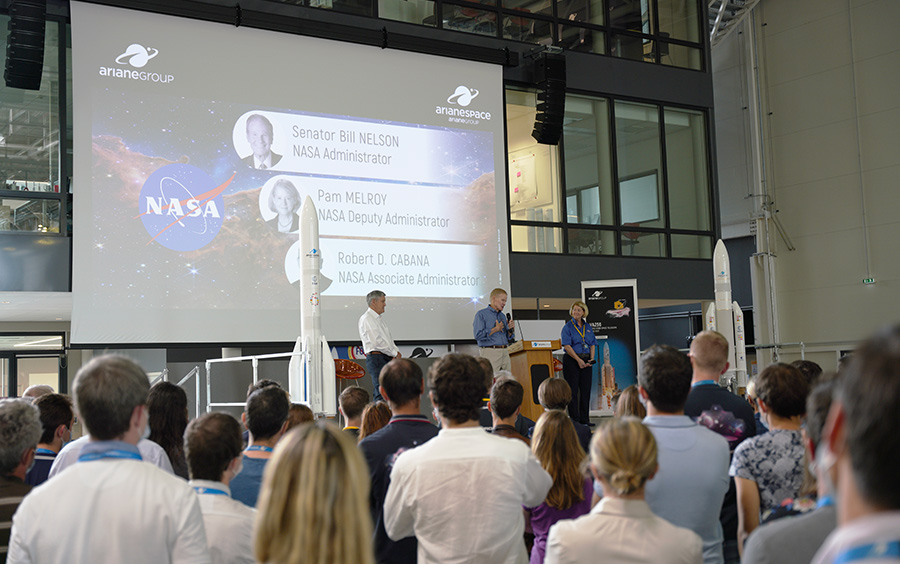 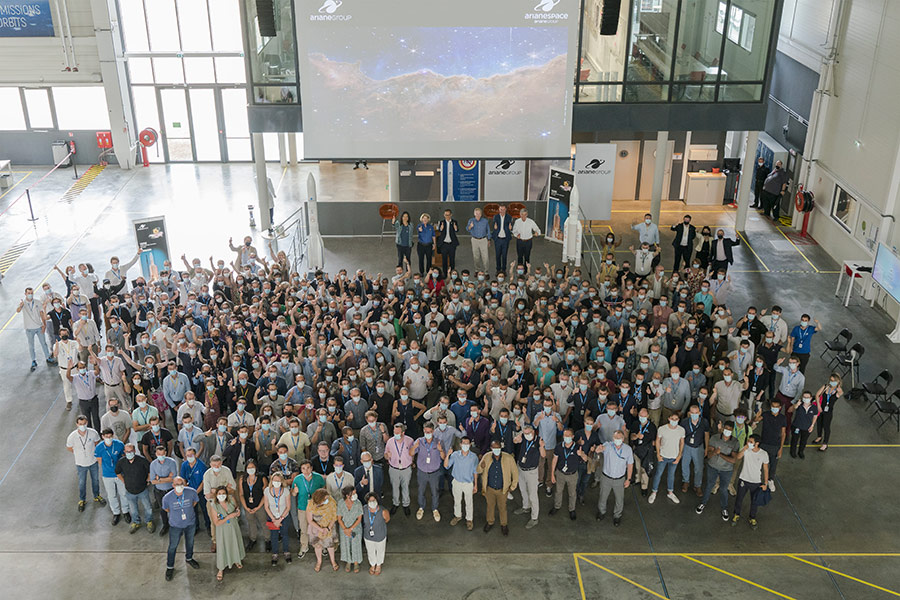 Robert D. Cabana, Bill Nelson and Pamela Melroy were happy to be part of the family photo with the teams from ArianeGroup and Arianespace at Les Mureaux on July 22, 2022. © ArianeGroup

“We wanted to be here in person to thank you for having made this enterprise possible, not only for our country, but for all of mankind. We are extremely proud of you and the work you have accomplished.” It was with these words that Bill Nelson paid tribute to the thousands of people who build and launch Ariane rockets in Europe. 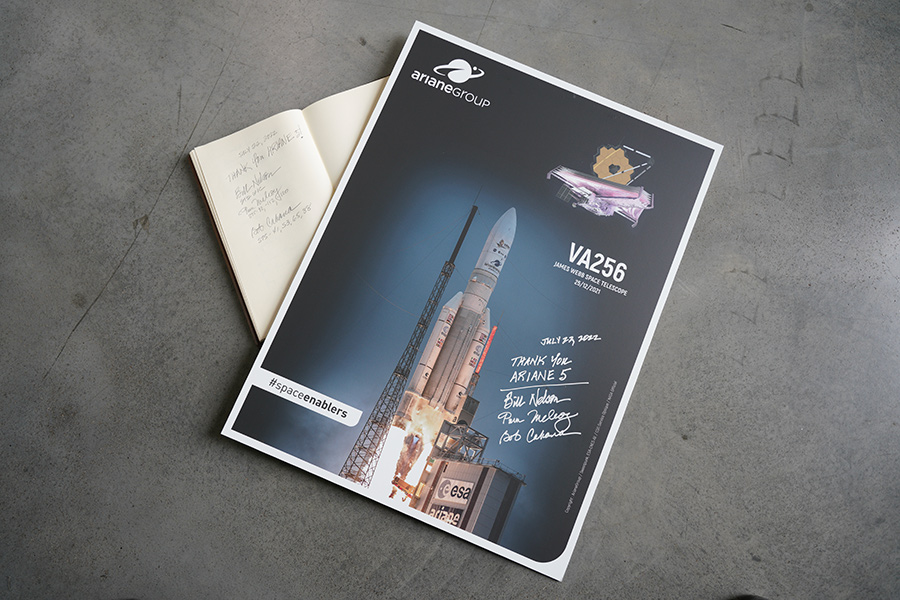 ArianeGroup is honored to have contributed to the success of the James Webb Space Telescope and we eagerly await its future observations. 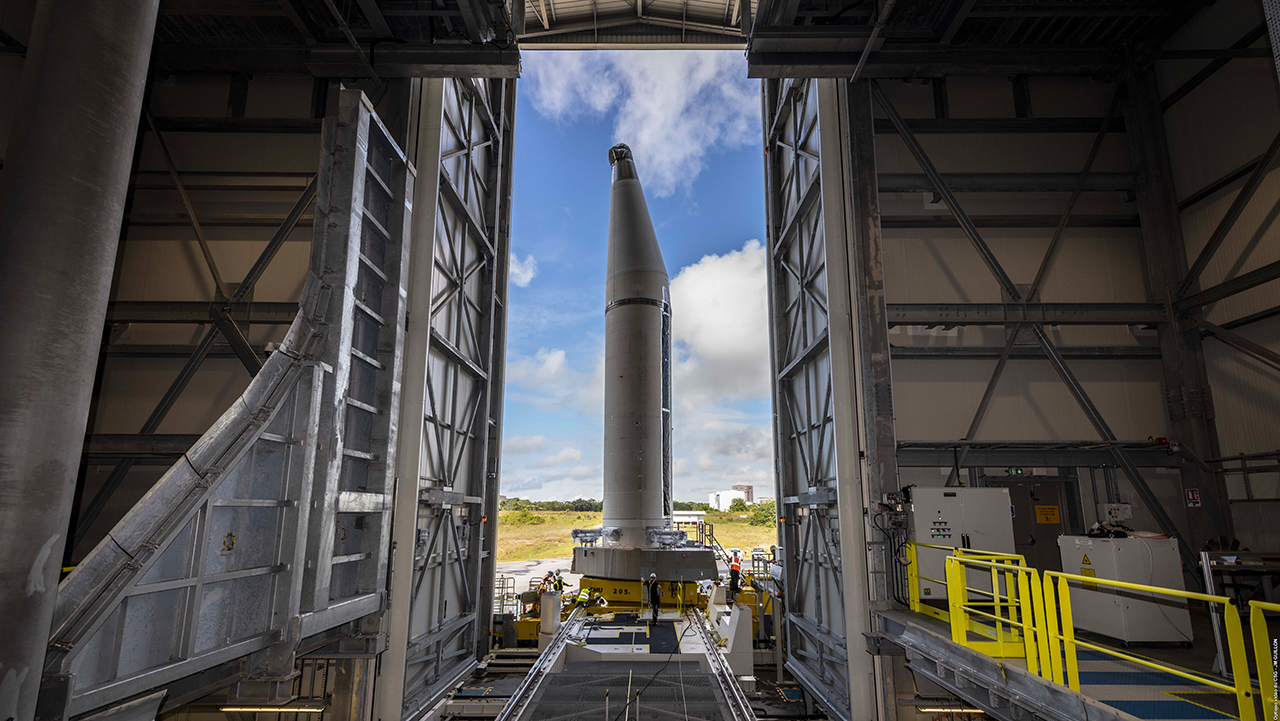 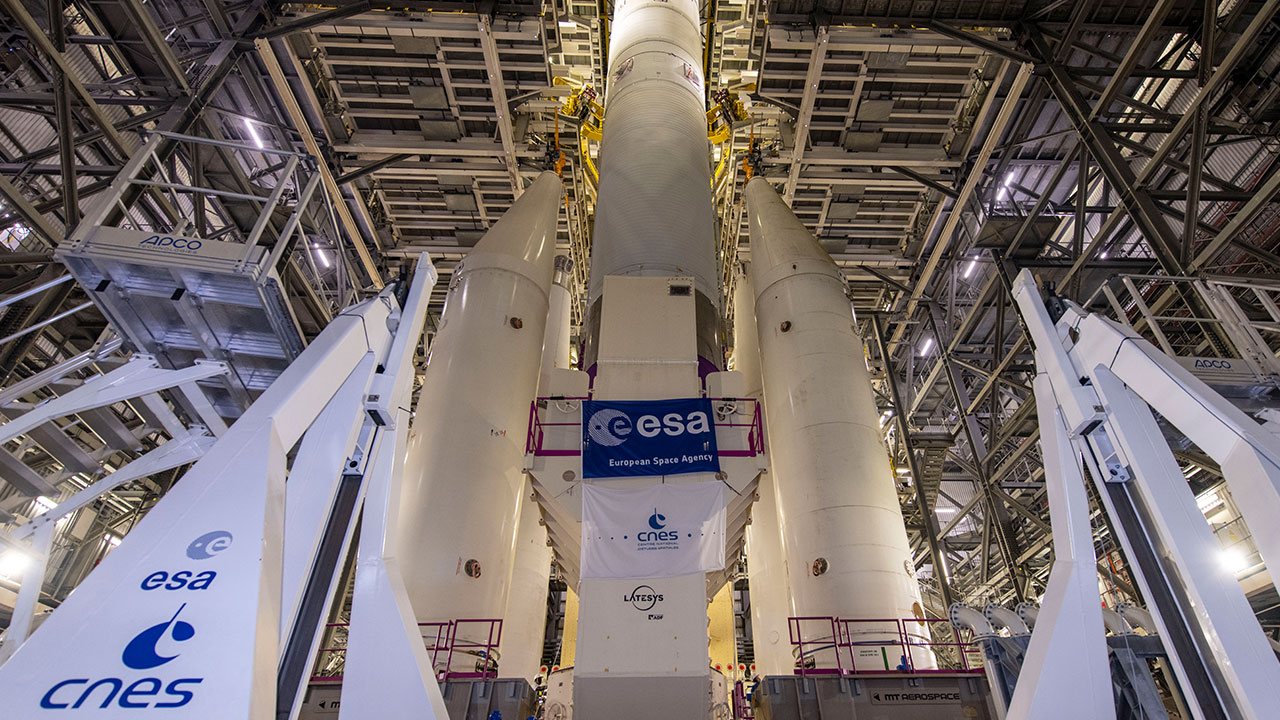